It’s going to be a very Merry Christmas for New York State lawmakers and bureaucrats, who are poised to get a lavish pay raise. As of now, Assemblymen and Senators receive $79,500 per year for a part-time job. The proposed pay increase would boost their pay to a whopping $130,000 by 2021, an increase of $50,500, or 64%. Naturally, our so-called leaders fobbed this decision off to a commission so their fingerprints won’t be on it – a weak attempt at plausible deniability. The commission will render a decision soon. Any bets on their recommendation?

Republican Senate Minority leader (in January 2019) John Flanagan and Democrat Assembly Speaker Carl Hastie are foursquare behind the gluttonous increase. Senators and legislators from NYC and its suburbs are behind it. The Governor loves the idea, too, saying, “We’re trying to get quality people into state government and frankly, we are non-competitive.” Non-competitive, non-moral and non-competent too. But the great pay bump comes at a steep price, says the commission and the greed-friendly newspapers. If approved, our lawmakers will be allowed to make only 15% of their income from sources outside their elective office. This is supposed to curb corruption. If approved, this would make New York lawmakers the highest paid in the nation.

According to the latest census data, the median household income for New Yorkers is $64,894. The median per capita income in the state is $37,156. Cuomo recently said, “You want to get talented people into the legislature. You have to pay them a salary that allows them to live and not be a martyr.”

You read it right. If an Assemblyman makes 79.5 K, he’s a martyr. That’s more than twice the income of many New Yorkers. Do agency heads and commissioners need to make five times the earnings of the average New Yorker? In this state, we have high taxes, less personal freedom, slow economic growth (especially upstate,) population loss (especially upstate,) no deal on state mandates, infrastructure in disrepair. In the real world outside of government, raises are based on productivity. Is this a record that deserves a raise?

Democrats are always bleating about income inequality – the exception being when it involves their income. Then it’s equality be damned. 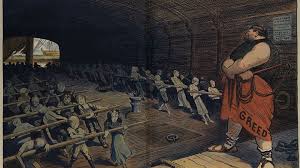 ( Who owns the government us or Albany politicians?)

This proposal solidifies the Albany government as a permanent ruling class: well paid, well-connected and safe in their incumbency. They will be groomed for government, work in government and retire from government—knowing nothing of life outside of government. Don’t tell Cuomo and his fellow Democrats this, but government does not have a dime that it doesn’t first take from someone who, by the sweat of her brow, earned it.

3 thoughts on “A BIG PRESENT FOR THEM- BUPKIS FOR US”

This is a text widget. The Text Widget allows you to add text or HTML to your sidebar. You can use a text widget to display text, links, images, HTML, or a combination of these. Edit them in the Widget section of the Customizer.
Loading Comments...
%d bloggers like this: